Alan Keyes — re. Obama Using a Stolen SSN: ‘You better probe a little harder to make sure identity you’re dealing with is a real identity’ – Obama Social Security Number to become issue in 2012 race? | by Joe Kovacs | @ WND.com

Obama Using a SSN Not Issued to Him and Also Uses a Forged Birth Certificate: http://www.scribd.com/collections/3166684/Obama-Birth-Certificate-Forged-Expert-Reports

Obama White House Disinformation/Forgery Campaign in Complete Disarray – They cannot tell their forgeries from the forgeries of others. White House is using as evidence a forged online short-form Certification of Live Birth (COLB) made by someone else. See the full story @ WND.com

Per Dr. Polland … ‘I created Obama’s certification of birth’  — White House links to deliberate forgery from Snopes.com, thinking it was real.

Link to the forged short form Obama Certification of Live Birth (COLB) the Dr. Polland made to demonstrate how Obama’s forger made the original forged COLB placed online by the Obama campaign in June 2008: http://i305.photobucket.com/albums/nn227/Polarik/BO_Birth_Certificate.jpg

The Obama Forgery Gang in the White House can no longer shoot straight and used the forged image made by Dr. Polland, which they grabbed off the internet, to make the copies of the short form birth certificate handed out to the press corp on 27 April 2011. As the old saying goes it’s hard to keep the story straight when one is lying.  Well it’s hard to keep the forgeries straight too when one is forging birth records electronically, posting them online, and they online exist in vaporware and no one has a real paper copy to make copies from. 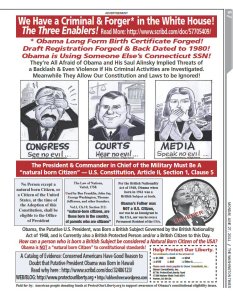