Obama’s bio info was submitted in 1991 by the then new author Obama.  And it was regularly updated for 16 years by Obama with no change in the “born in Kenya” statement therein. But the cover story and response now is – “it was a fact checking error’.  But Obama’s agent Dystel & Goderich’s instructions and procedures to all new authors required writers to submit their own bios. This is an industry standard procedure. So we are now supposed to believe that Obama himself or his agent’s editor made a “fact checking error” back in 1991 about his birth place and no one noticed for 16 years as it was updated!

Not only are there pre-2007 U.S. accounts that Obama was born in Kenya, but pre-2007 African newspaper accounts too.  Are newspapers on two continents published over many, many years all wrong?  Common sense tells us that Obama is a fraud:
http://www.scribd.com/collections/3248475

College admission records will likely show he attended as a foreign born student.  That is why Obama is hiding his college records.  Obama likely never registered for the draft since he was a foreign student and did not have to.  Thus the need in 2008 to forge and back date a draft registration card.  Hawaiian laws allowed children born abroad to a Hawaiian citizen to be registered as born in Hawaii.  Obama could have been physically born in Kenya and yet registered by the maternal grandmother in Hawaii as born there which would trigger the standardized newspaper birth registration accounts in the Hawaii newspapers in 1961.  With no Hawaiian hospital generated birth registration documents, or other contemporaneous records of his physical place of birth except in Kenya,  there was the need to forge the short-form birth document in June 2008 and the long-form birth certificate PDF file put on the White House servers in April 2011 to backup his concocted life narrative.

Was Obama lying about his physical place of birth then or is he lying now?  Either way he’s a liar.  He’s also a felony draft registration evader, government document forger, and identity thief using someone else’s CT Social Security Number.

Update:   Additional coverage by Breitbart.com of the major media’s non-coverage of this news story:  http://www.breitbart.com/Big-Journalism/2012/05/18/Media-Refuses-Coverage-Obama-Kenya-Lit-Agency

Of Trees and Plants and Basic Logic and Citizenship Types: http://www.scribd.com/doc/44814496/Of-Trees-and-Plants-and-Basic-Logic-Citizen-at-Birth-NOT-Identical-to-Natural-Born-Citizen 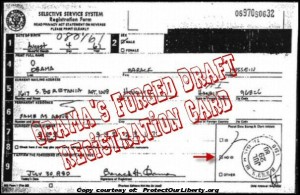 The Obama constitutional eligibility issue is not a fringe issue:

This recent poll in AZ shows 6 out of 10 voters there want Obama identity and eligibility investigated: http://www.wnd.com/2012/05/amazing-number-want-to-know-candidates-eligibility

“The American people will never knowingly adopt Socialism. But under the name of liberalism they will adopt every fragment of the Socialist program, until one day America will be a Socialist nation without knowing how it happened.” Ronald Reagan alerting us to Norman Thomas’ and the socialist/progressives’ long-term stealth agenda to transform the USA from a constitutional republic into a top-down, central controlled, socialist form of government